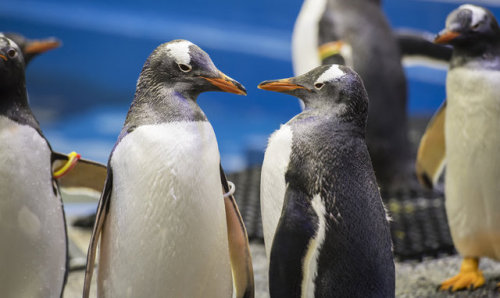 In the penguin habitat at an aquarium in Sydney, Australia, love is in the air.

The newest penguin couple here are named Sphen and Magic, and the two males are about to take the leap into parenthood.

Sea Life Sydney Aquarium said they became inseparable before breeding season, “constantly seen waddling around and going for swims together.”

There’s a reason gentoo penguins have been called “one of the more romantic seabirds in the animal kingdom,” as Oceana explains, and it comes down to their nesting habits.

The species constructs nests out of pebbles, and according to Oceana, “individual pebbles may be shared between potential mates beforehand as a sign that they are interested in becoming a breeding pair.”

The couple, which have become known as Sphengic, have now gathered more pebbles than any other penguin pair at the aquarium.

The aquarium says their caretakers initially gave them a “dummy egg to allow them to practice incubating and develop their skills.”

It says it quickly became clear they were “absolute naturals,” which prompted the caretakers to give them a real egg from another pair of penguins that had two in their nest.